As the Stomach Churns

When Paul started his blog, his intent was to write about his baby (Caroline) and food.
I never intended to write about food, but it is becoming a big concern around here.
While Paul writes about good food, I have to write about the absence of good food.

As the regular readers know, Riley has been having some gastric issues which led Joan to first cut out all dairy, and then move on to eating nothing but chicken (lightly seasoned), rice, pasta and potatoes.
During the week, I eat the same thing she does, but over the weekend I had to venture out and get some variety (in my food)

Maybe it's working because things have improved dramatically around here. They are still far from perfect, but far from as bad as they were.

If it's not the diet change that is healing him its the other change that we made.
If you work for the government or have a weak heart, please cover your ears so you don't hear what I am about to type.
.
.
.
.
.
.
.
.
.
.
.
In blazing defiance of the recommendations of the American Academy of Pediatrics, we have allowed our son to sleep on his stomach (gasp, horror, shock) 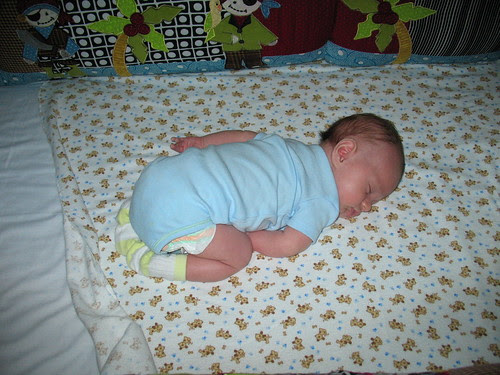 Now any of you with children born before Johnny Carson retired from TV and Nirvana hit the mainstream will say, "What's the big deal, all of my kids slept on their stomachs. The doctors told us to."

And you'd be right, but you'd also be OLD.

In 1992, the scientific establishment decided that the risk of SIDS would be reduced if babies slept on their backs. They say SIDS deaths have dropped dramatically since then, so they may be right. (yes I did just make reference to the intangible "they" and I did mean it in the worst possible way)

Now, unlike most people, I prefer a little causation in my science, not just correlation, but nothing I've read seems to have it.

Regardless, I don't dispute that putting babies to sleep on their backs is a good idea.

But, when the options are:
A) Have a screaming baby laying on his back all night keeping everyone awake and preventing his body from healing, or
B)Have a baby sleeping peacefully on his stomach, while increasing his risk of SIDS from .05% to .11%.

Bottom line is he's resting peacefully and only having a couple of screaming fits everyday. Those fits are nowhere near as long as they were a couple of weeks ago. The crying increases towards the end of the effective period of a Zantac dose, so that is having some positive effect.

Wednesday we'll be heading over to Baton Rouge to see a Gastroenterologist that our pediatrician recommended. I hope she's got the answers.

Good thing we already met his deductible this year. That 'll allow him to have a couple of little cosmetic procedures before the year is up, at no extra cost.
Something has to be done about that turkey neck/double chin he's sporting. 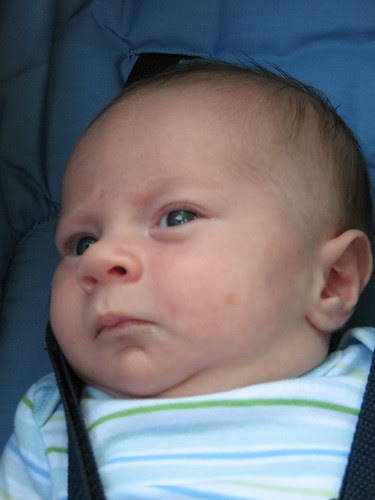 (Wow, I really might get arrested if any strangers read this)
Posted by bwallace at 7:34 PM

So happy to talk to you today. From the research I did when my daughter was having tummy problems, it's the best way for a baby with tummy problems to sleep -either that or slightly elevated.

My daughter had so many sleep issues in the first several months stemming from her tummy problems. sigh.

That swing y'all have saved her (and my sanity). She was slightly elevated and that with the swinging allowed us both some sleep.

I hope you and Joan are able to rest some. Praying for little Riley's tummy. He's adorable.

my daughter screamed a lot when she pooped. that just stopped one day when she was older. her doc said that it just is like that for some babies. i hated that. that was the answer for everything - it just is. i hated that my daughter was in pain and overtired.

my only suggestions are mylicon before joan feeds him, swaddle and then the sleeping positions y'all are already doing.

big hugs to joan and riley.

You are advanced in your willingness to say "f- them" and do what you feel is right. It took me a good 4 months to admit to anyone that Whitney sleeps on her belly! Now she sleeps in the bed with me. How bout that, AAP?? ;) Sounds like you guys are amazing parents to little Riley!

KAYLAPEARSON.COM said...
This comment has been removed by a blog administrator.
October 17, 2008 at 9:30 PM