Now is where we start to move forward. Though the bad is still there, now is the time to talk about the good surrounding it.

On Monday, my Dad's services were held at Delhomme funeral home.
Between the Sunday visitation and Monday services, I know that at least 400-500 people came through.
For the services, all of the seats in the chapel were filled and there were people standing in the back. One of the directors told me that the seating capacity is between 300 and 350. It was an amazing turnout and we thank everyone who came.
I have never seen so many grown men cry at a funeral. I think that means a lot. Seeing the broad spectrum of people that my Dad's death affected was a great reminder of what a guy he was.

Seeing such a crowd made us a little nervous though, as Joan and I offered to have the traditional "afterparty" at our house. I told a few people, "Even if only a third of these people show up at our house, we're going to be packed."

Now, after making a list of everyone we can remember being here, our final guest count was 125 people.
And that was basically all in our living room, kitchen and patio.
It was so crowded you could barely move. People were passing trash around instead of trying to fight to the garbage can.
Here's a few shots from before it got really packed. 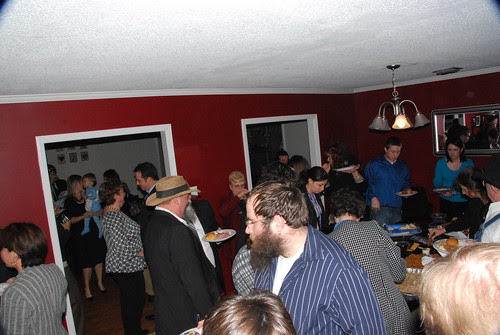 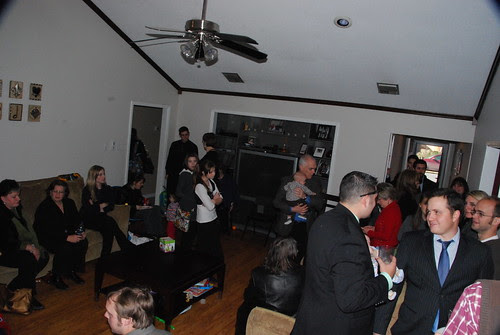 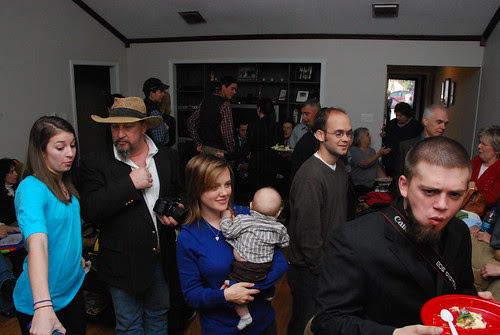 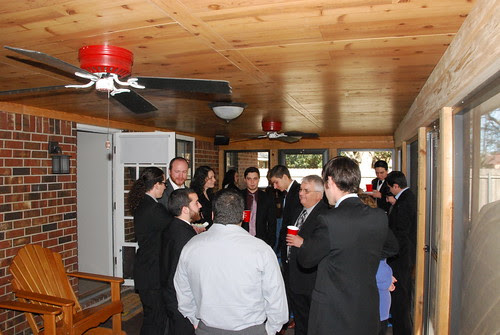 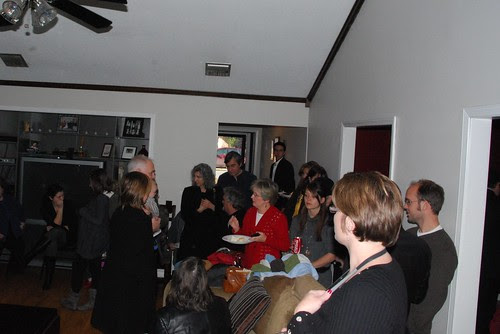 We went through so much food it was unbelievable. Two Hams, a brisket, a few sandwich trays, 3 or 4 chicken finger trays, a few fruit trays, big pans of side dishes, veggies trays and at least two king cakes. Food was disappearing as fast at it hit the table.

Family members who hadn't seen each other in decades were able to reunite. It was great. All of his surviving paternal aunts and uncles were together for the first time in a long time.

Over the last year or so, my dad had been talking about planning reunion with his cousins. That didn't happen, but a majority of them were here this week.
I don't think there is anything that would have been more fitting than what we had here Monday.

Best of all, the uncle that my Dad was closest to wore his overalls, just as my dad would have if he was here. 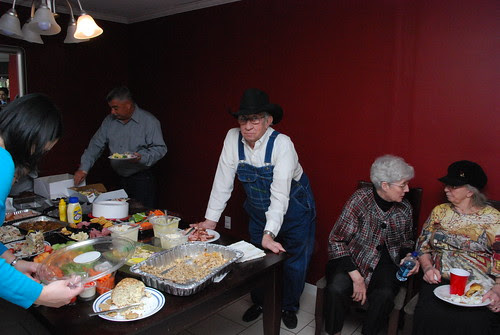 While the adults caught up, the kids enjoyed what ended up being a nice day.
We had a stash of foam swords that kept kids of all ages entertained until all of the swords were destroyed. (fortunately target had more and I restocked swords and foam battle axes.) 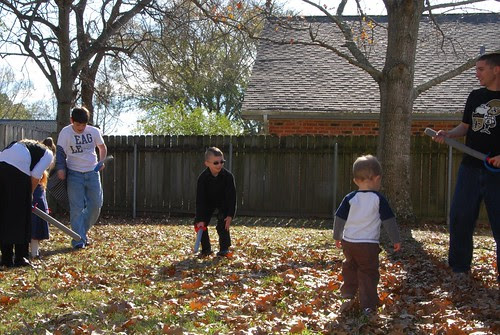 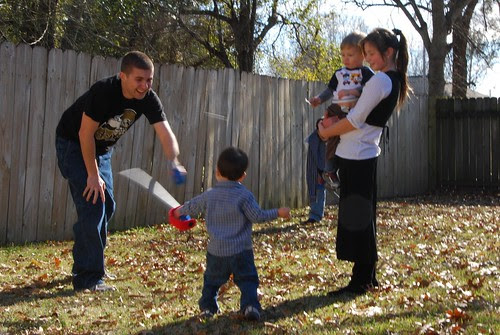 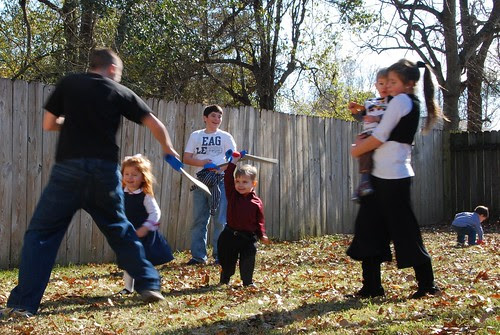 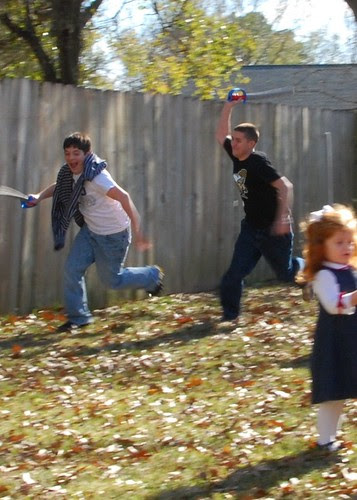 (yes, I was out of breath for at least an hour after 10 minutes of vigorous playtime.)

I know all of the family being here helped my Mom a lot.
Plus she got to see Riley, Anna, and Gabe for the first time in a few weeks. 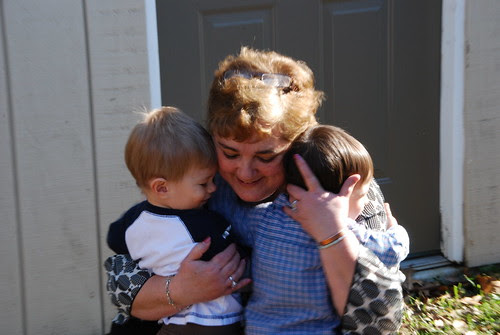 Thursday and Friday we were at visitation and services for Joan's grandfather.
Riley proved himself to be surprisingly socially inclined and made lots of new kid friends.

As a sign that things are getting back to our new normal, we at Johnson's twice this week.

Once with Darren, Sangee and Hailee 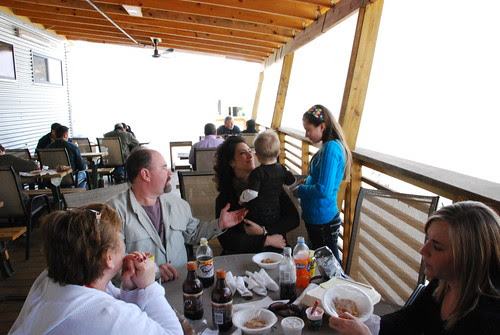 and once with Shane, Tara and their dozens of kids whose names I can't recall (just kidding?) 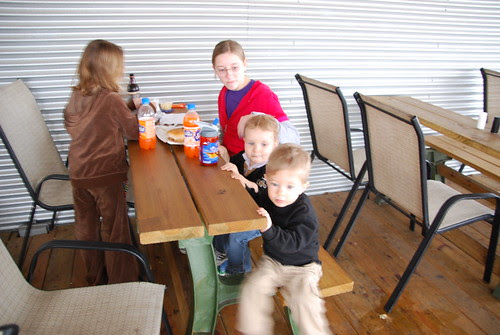 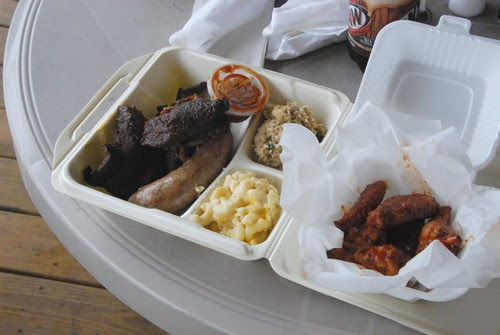 Saturday, as you all know, the Saints put a whooping on the Cardinals, and Riley watched a lot of the game.

We figured out how to rig things so that he can play with the basketball goal Nonnie got him for Christmas. 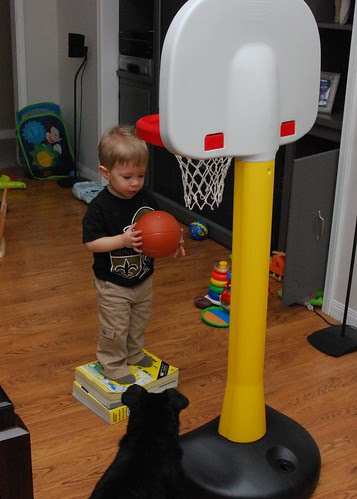 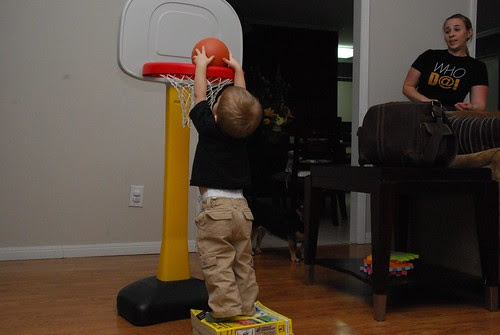 Sunday, Riley showed us why he's not yet ready to be trusted for more than 2 minutes unmonitored. 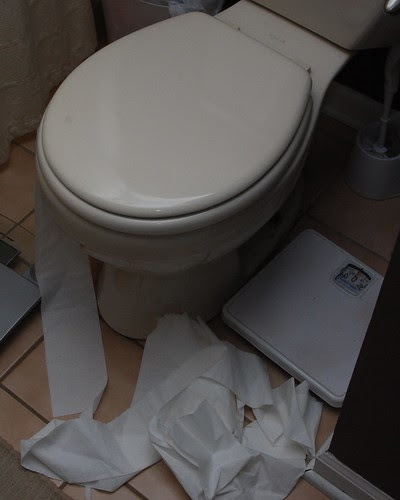 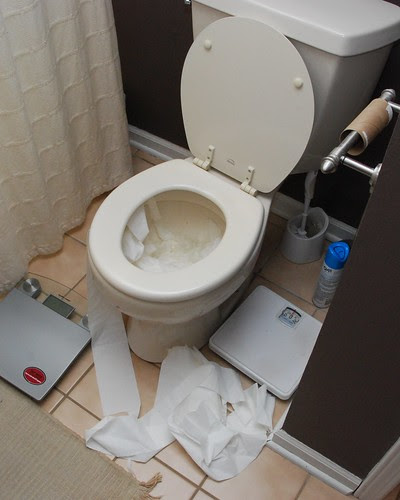 But we took him to the park to feed the ducks anyway. 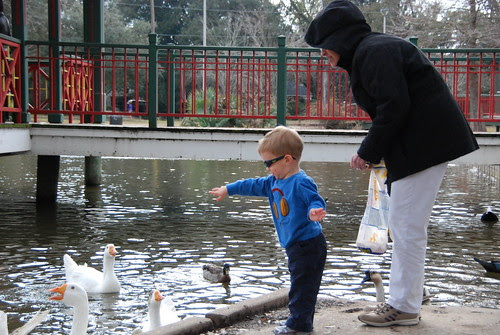 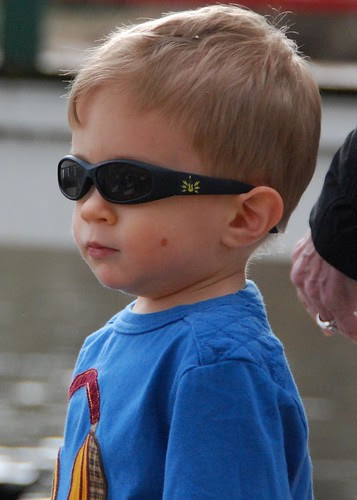 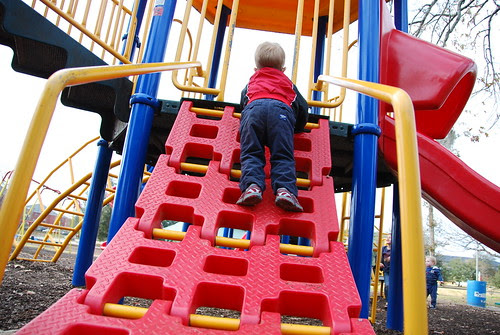 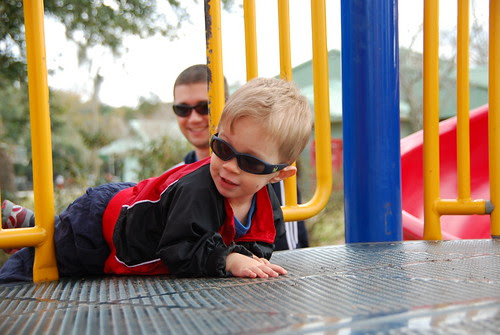 And also learned that he's not quite ready for the big, bumpy slide yet.
Here's a shot right as he went airborne off of the second bump and probably made a little contribution to his diaper. 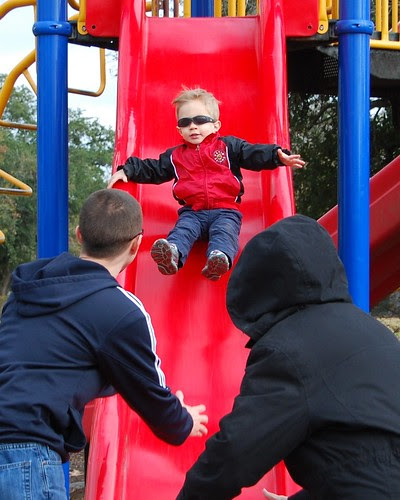 That's about it.
The weather forecast for next weekend is looking nice.
We could use some time out in the sun after the cooped up stresses of the last few weeks.

Again, thanks to everyone for their prayers, encouraging words, food, flowers and Lung Association donations. I hope it's a long time before our family goes through anything like these last three weeks again, but it has been a great reminder of what good people we have around us.
Posted by bwallace at 12:38 PM

Your eulogy at your dad's funeral made me cry because it was so much more personal than any other I have heard and your dad really was a great man. I had to give my dad a hug afterward because I thought about him while you were speaking. Now this blog did it again (when I saw the picture of your uncle in overalls).
I still have a wooden baseball card display that your dad made me when I was really into collecting baseball cards.
Even though it was a sad reason to get together I was so glad to see everyone again and I wish we could have caught up more. And I was glad to be there to honor your dad.
I love you, Brandon.