Down with the Sickness

This week has been all about the funk.
Not the musical variety though, we're jammin' to the head congestion variety.

Last weekend, the little man started getting all nose constipated and quickly passed it on to Joan.

Here he is in all of his puffy face, congested glory. 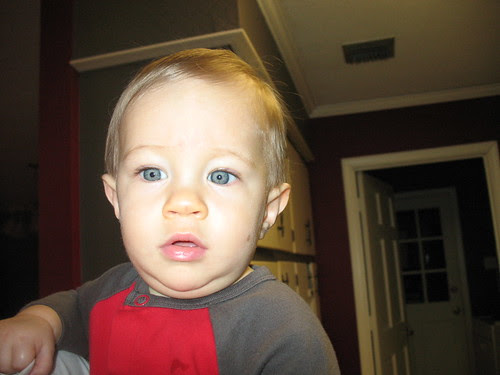 Due to my impermeable immune system, (thanks to a steady diet of lemonade, jelly bellys and pulled pork), I never got hit.

Riley's sickness has caused a complete collapse of his sleep schedule, and he is now waking up every hour or so, presumably to try to breathe. It's also keeping him from eating as much as he should, which is not good considering his ped visit last Monday.

His 9 month checkup showed us that he is still at the bottom of the class, size-wise. He weighs 17 lbs 4 oz and is 27.75" tall. His height and head are right around the 25%, where they always have been, but his weight has dropped down to the 4%, down from between 15-20%. That got the doc concerned, so she told us to fatten him up and come back in a month.

Unfortunately, the sickness has made him eat even less than usual for the first week, so we're just gonna pretend that she said come back in 5 weeks instead.

He likes what we're feeding him, he just can't breathe. If things don't pick up soon, we're gonna hook him up to a tube, froie grois style.

Also hit by the sickness bug was my mom, our babysitter.

Fortunately though, Joan and I both have flexible employments and were able to cover for a couple of days.

My office is paperless, so, as long as I have internet access, I'm able to access the entirety of my files, sign mail, read mail and get work done, even with the kids running around. 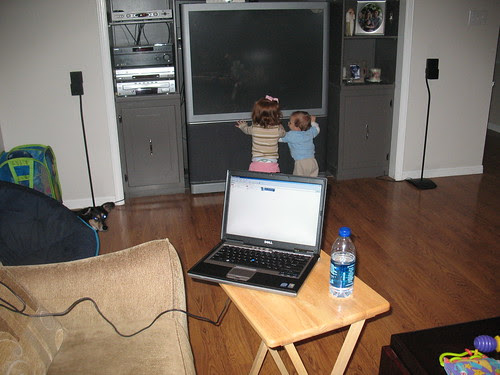 Unfortunately, the weather was rainy, so we weren't able to play outside, which left Riley and Jimmy staring, longingly, through the front door. 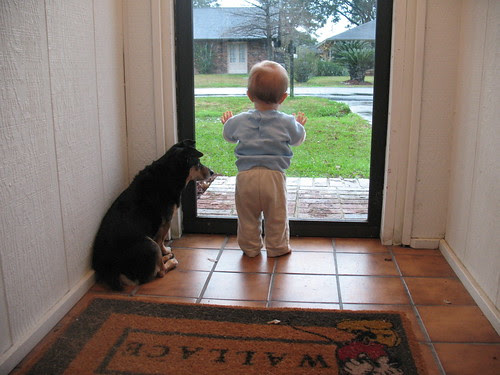 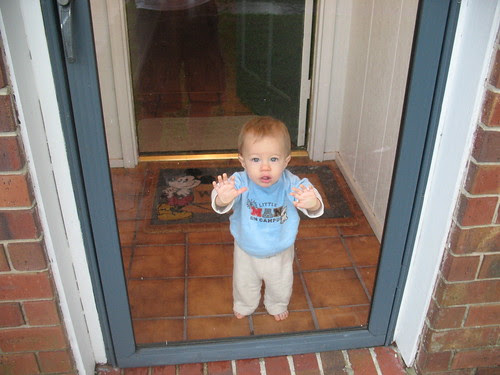 When the boys get out of control, I just stage a little mock arrest. This is hopefully the only time Riley and Gabe will ever have to assume this position together, but I'm not putting any money on it. (especially with the moves that our Fed, State and Local govs are making toward a police/nanny state. But that's for another day's discussion) 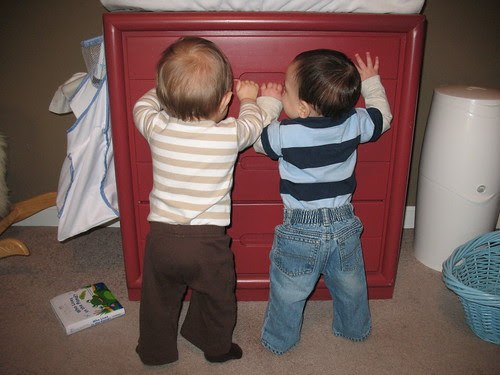 Joan also got them for half of a day and struck her best barefoot, redneck- mom pose (with authenticity ruined by the diamond earrings and charity 5k t-shirt not found in native hillbilly cultures) 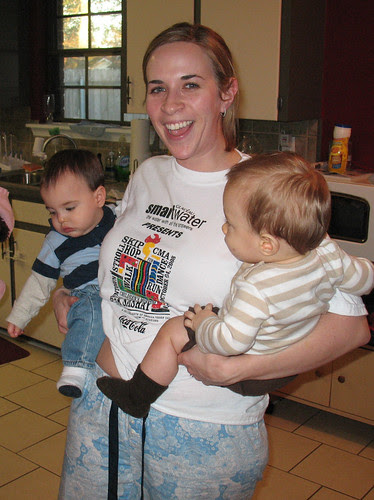 They're pretty good kids (except that none of them have ANY volume control.) They usually just play peacefully until naptime. 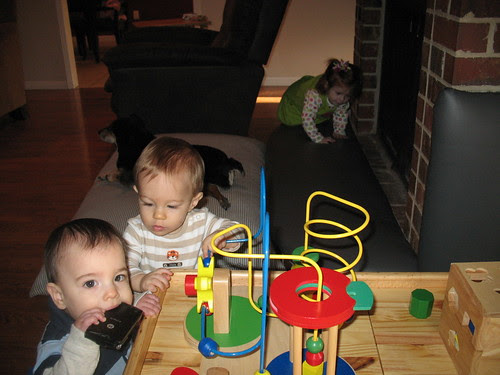 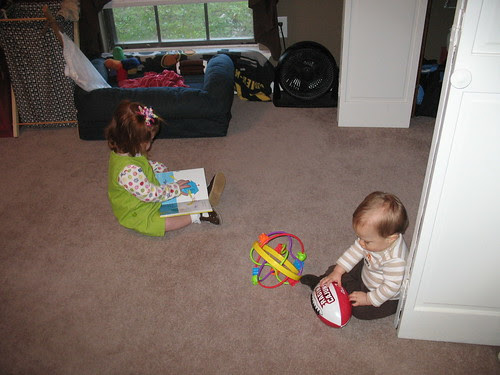 I was also able to take Riley and Anna for a little bike ride. Check out the thrilled looks of anticipation on their cherubic faces. 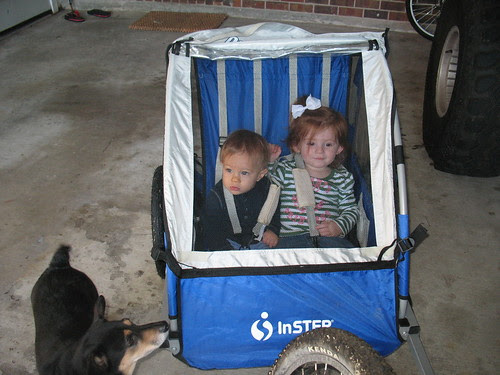 It is interesting to compare that pic to their last ride together 6 months ago. 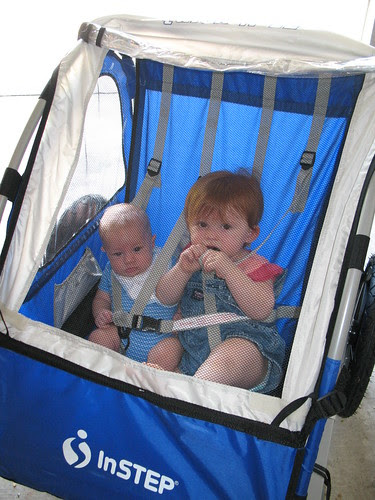 Riley also got the opportunity this week to visit Poppy at work where he was able to both sit in a helicopter and pretend to be the son of a rich Middle Eastern oil family. 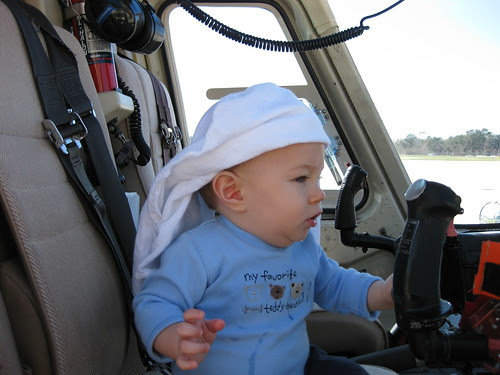 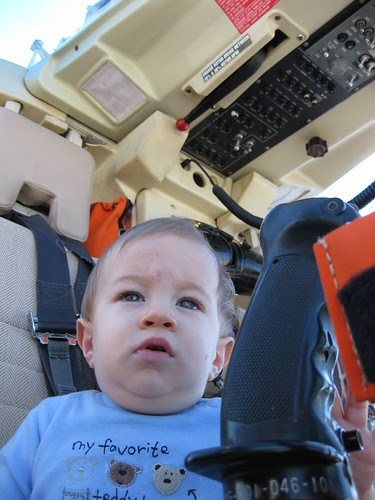 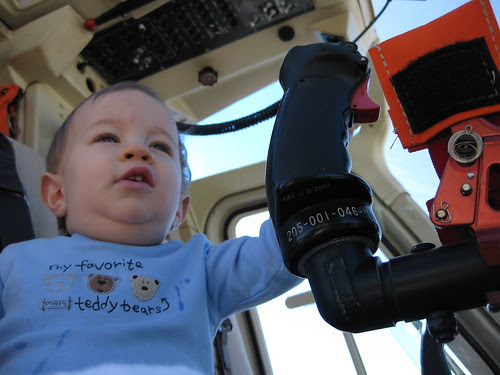 When we were kids, we were able to take helicopter rides on a few occasions (dad fixes 'em and his dad flew 'em.)
It's not something most people ever get to do, unless they work offshore. But I guess our modern safety/litigation culture (dang lawyers) has gotten that practice shut down. Hopefully, he'll get a chance to fly in a chopper at some point though.

Due to his sleep schedule, he and I ran around on Saturday and Sunday mornings while mommy tried to sleep.

We stopped at my office where he nailed the perfect, "You surprised me with a camera while I was working" look. 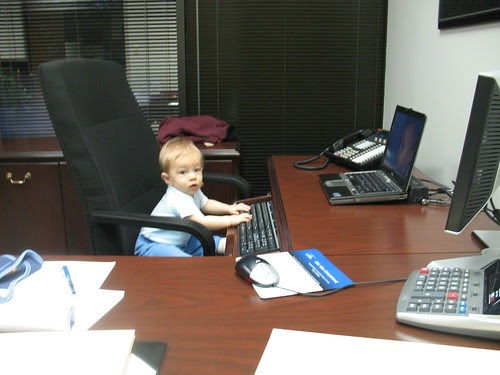 Then he tried to camouflage himself between my two screens.

Can you pick out the real baby? 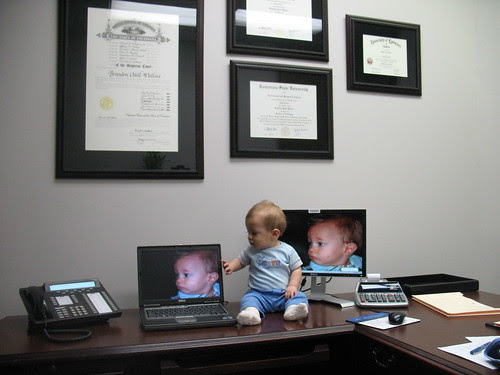 Next we had breakfast at Great Harvest, where he was cranky inside, but fully at peace sitting outside and giving me what has become his typical picture face. (one that doesn't exactly give off an aura of intelligence) 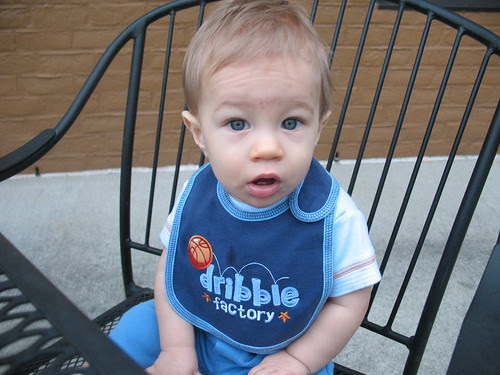 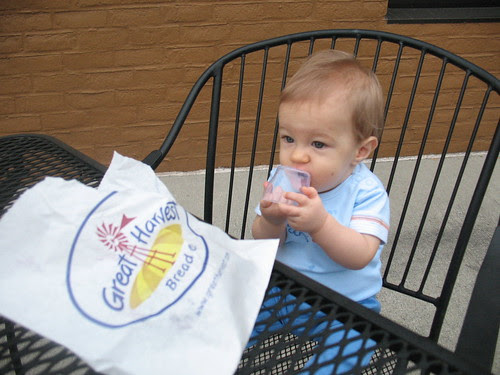 Sunday we had breakfast at Meche's , where, though he couldn't have any donuts, he was more than happy just walking along the corner booth.

Next we went to Wal-mart, where it was just too early to have much success at Wal-Mart Bingo.(aside from the diaper in the parking lot, which we actually saw at 7:30 am) 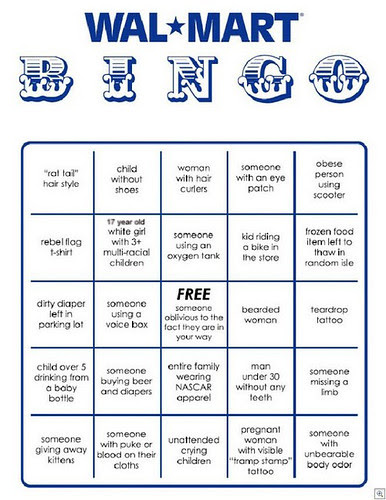 (disclaimer- I grew up in a trailer park,had a "rat tail", have purchased beer and diapers together, and my kid never wears shoes, thus, I have all of the street cred to post that item non-offensively)

Then we just drove around, and I learned that no matter how much he fights off sleep when you're driving, if you get on a washboarded dirt road, like the one at Lake Martin, he'll be asleep within 50 yards.

Joan has been brave and had dairy twice this week in the form of fried shrimp breading and the bread at O'charley's (we gave 'em another chance. it's kid friendly)

Maybe next week, we can make it three. 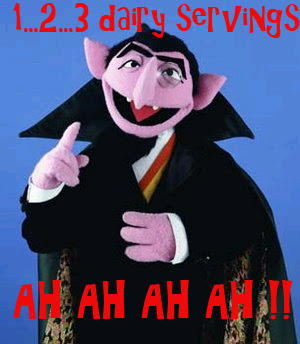 On the developmental front, he's about to get two more teeth. Combine that with his mouth breathing and we've had to wring the fronts of his shirts out all week.
He's also begun to use crawling as a form of inter-room travel instead of just moving around within one room.

Finally, he's on the cusp of walking, he just needs to feel the confidence. He stands unsupported until he realizes what he's doing, then he sits down. He's also taken a couple of falling steps between us.
I give him until Mardi Gras to get with the program, or he can start crawling around town apartment shopping.


And to top things off with a good laugh, here's a little video to enjoy, wherein someone took a clip from Sesame Street and bleeped every instance of Count VonCount saying "count" in his song. Let's see where your mind goes.


The Count Censored - The most amazing bloopers are here

(You see how I brought it all back together there? That's called style, kiddos)
Posted by bwallace at 5:29 PM