As usual, we tested our luck this week, and, for the most part, he passed with flying colors.

Early in the week, he cut his first tooth, which we have discovered does not photograph well. The neighboring tooth is on its way through too, and hopefully its arrival will be as uneventful as the first.
He's also gotten pretty good a sitting up on his own (but he's not good enough for the wood floors yet.) 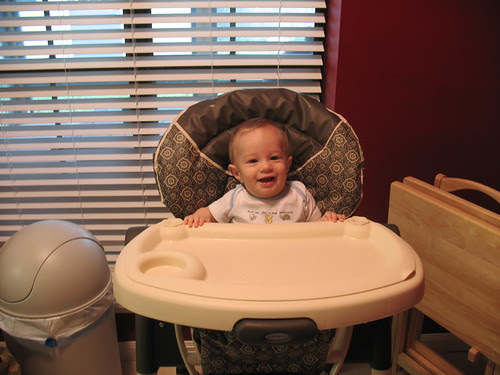 Thursday, he had his six month pediatrician visit. He tipped the scales at 15 lbs 4 oz, after not having a smelly diaper for 4 days, so you've got to think that is a little heavy. Still, that only puts him at the 10% weightwise.

The measuring tape has him at 26 inches which is the 25% for a six month old.
He also got three shots, and, despite screaming for a few minutes, did not have any ill effects the following day, like we had been warned from some other parents.

The doc's office also told us that now would be a good time to put him in an exersaucer to develop his physical skills, but that we should never use a walker with wheels because he could hurt himself. 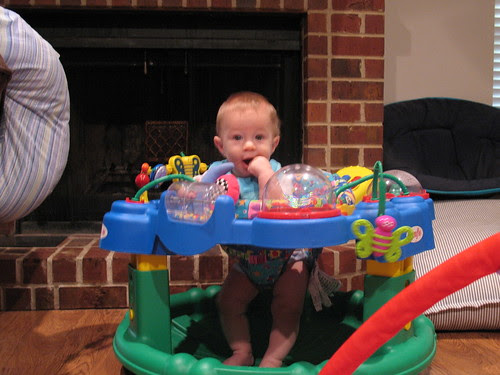 On a side note, this week he has gained much more control over his deathtrap walker with wheels (which he really likes) and has taken to following a ball around the room, not realizing that once he catches it, there's no way to pick it up. 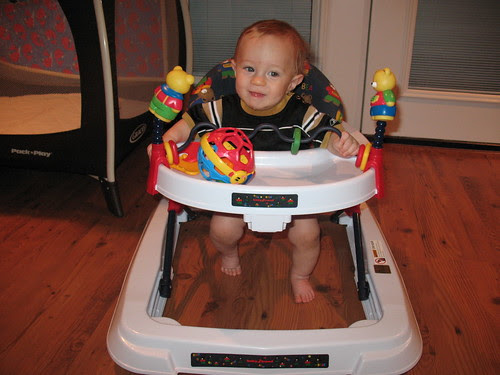 Friday, we took it easy, knowing that we had a full weekend ahead of us.

Saturday morning, he had his first experience with the wonderfully speedy service in the Sears auto department (read with sarcasm). You can see how hypnotized he was by the prompt attention. 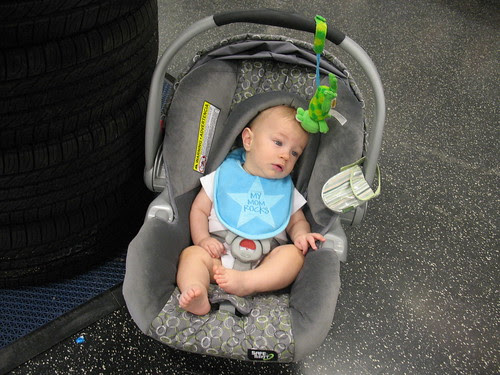 The sluggishness helped though when we went back later to pick the car up and he was able to squeeze in a healthy nap while Mommy waited in line. 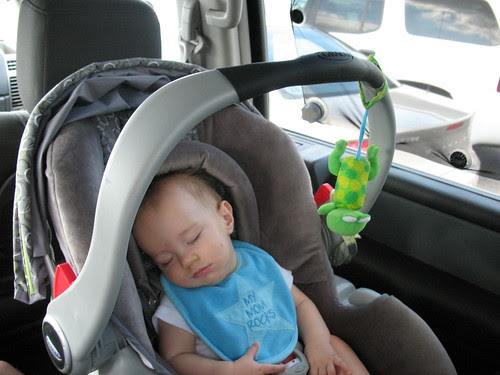 Later, we met my parents and brother, Jake, at Johnson's Boucaniere for a hearty outdoor lunch on their newly constructed (and still being constructed) wrap-around porch.
You just can't beat that place in my book.
The adults like the food, the atmosphere and the staff.
Riley loves being outside and hamming it up for Ms Claire, Ms Lori and the staff inside. 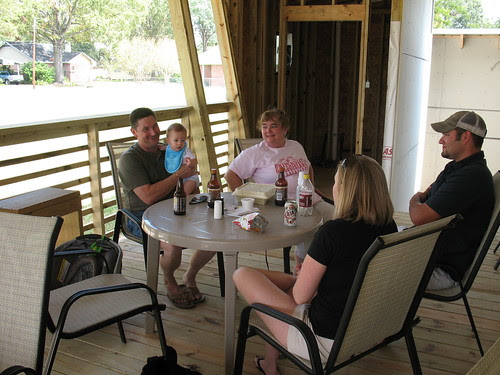 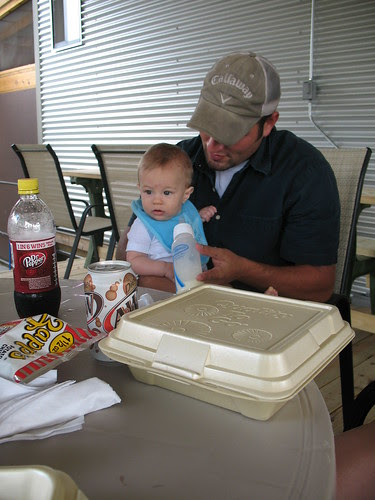 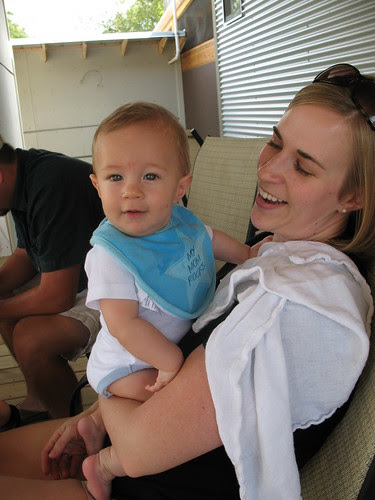 Nothing tops off a good meal like good music, so we headed down to Girard Park to catch the Red Stick Ramblers' set at Festival Acadiens. 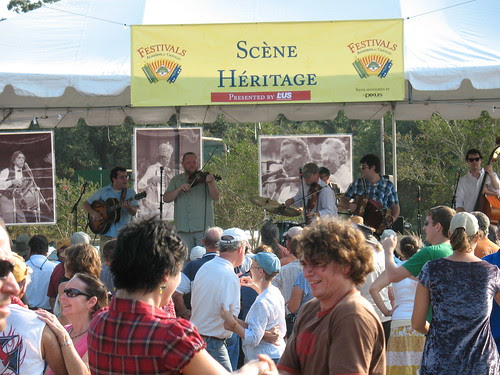 It was sunny, so he sported his hat and sunglasses, which really seemed to amaze people. Sort of a baby "Fear and Loathing" look, without all of the hard drugs. 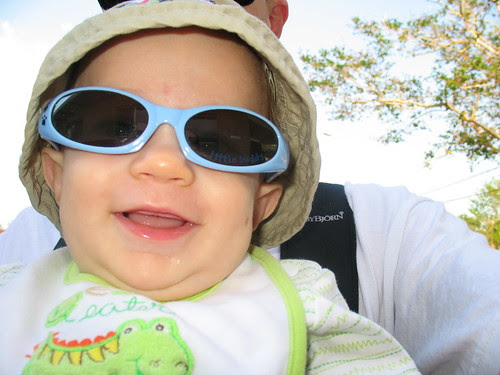 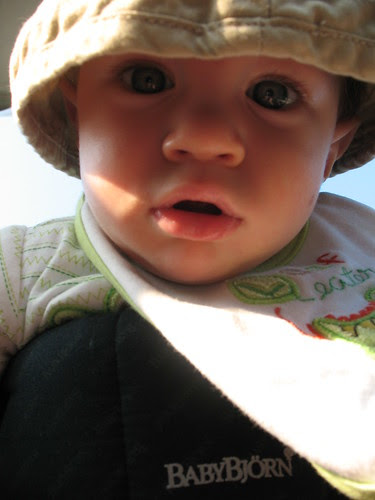 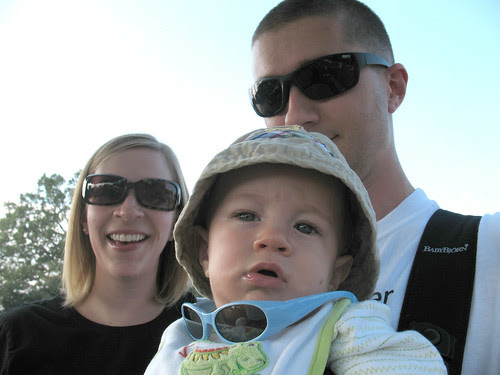 Sunday was the big test... his first 2 hour car trip and Saints game.
He woke up early and cheery, ready to hit the road. 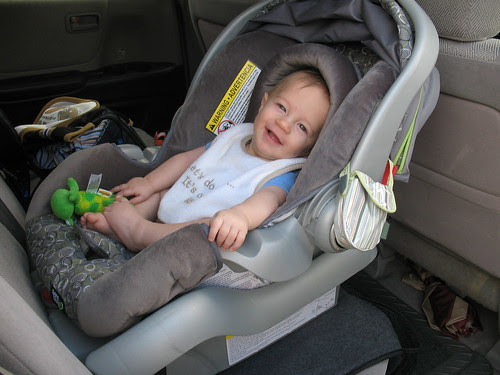 Once we got to NO, he donned his Saints gear and hung out with his godmother, Lesley. 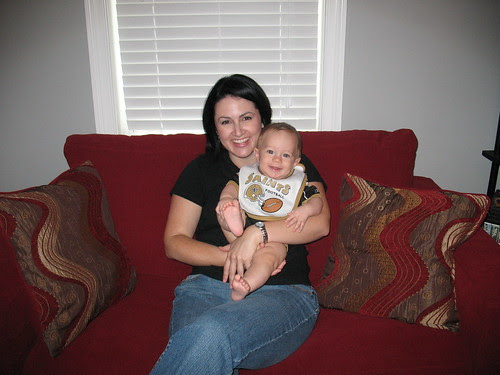 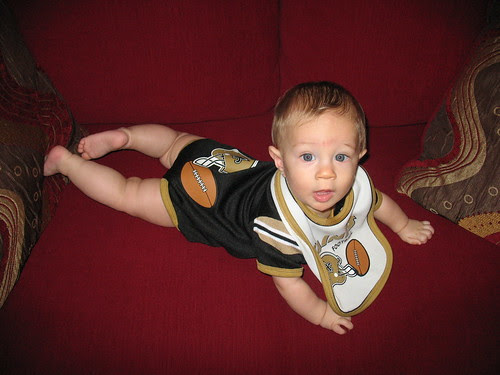 Pregame, he was in a good mood, but not really in the mood to look at a camera. 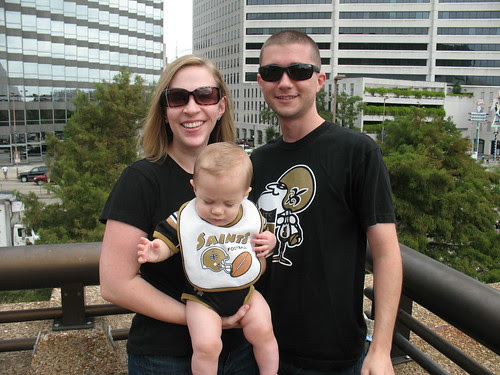 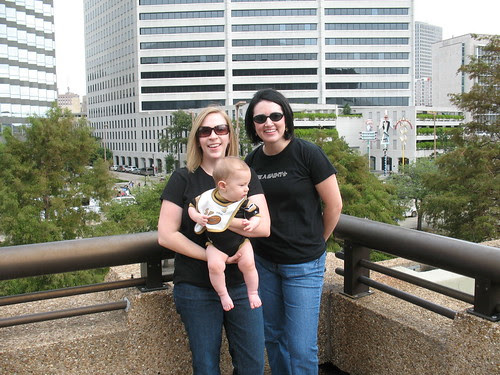 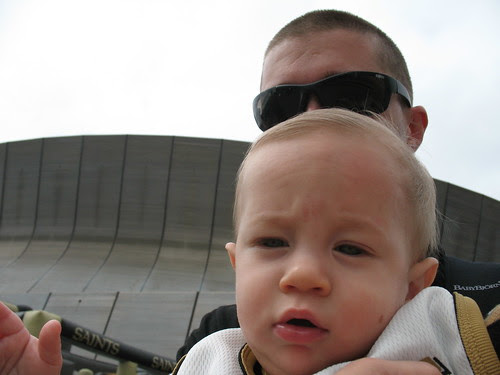 Since we've worked so hard at cultivating his good taste in music, we were sure to protect his ears with baby earplugs and a nice hat to keep them in. 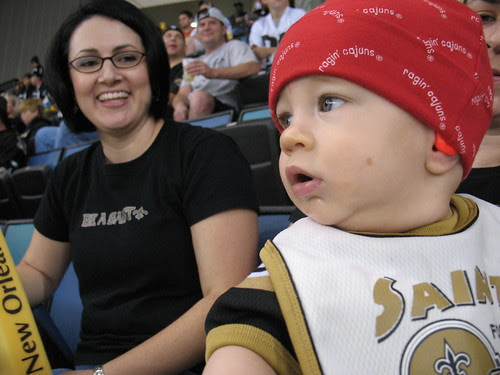 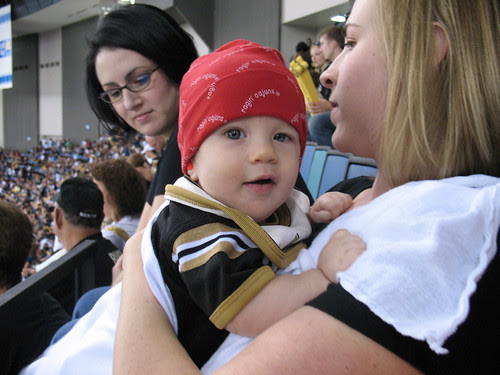 He didn't try to take them out at all. They must have worked because he didn't even flinch in the cacophonous Dome. He even napped through most of the first quarter. 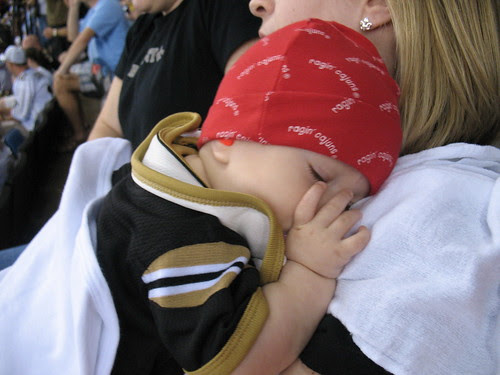 Plus, about half of the people that walked by commented on how cute he was. Some even took pics of him. (He's already got paparazzi.) 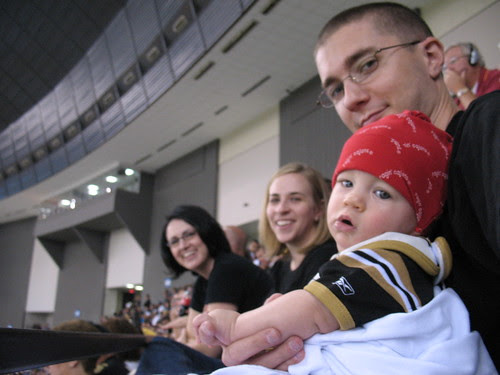 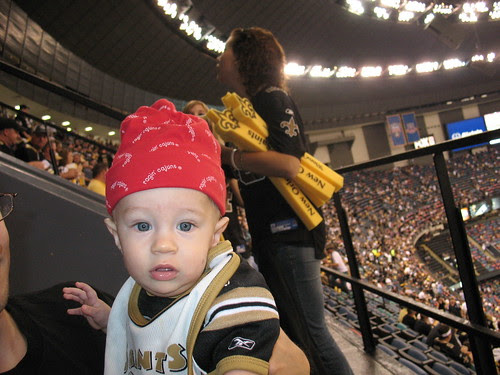 And the Black & Gold's 34-3 whooping of the Raiders put him in a good postgame mood (or maybe he was just happy to get a clean diaper.) 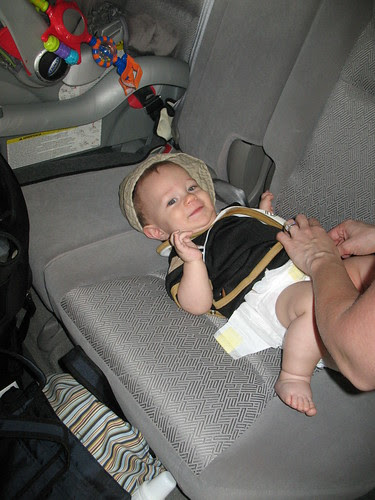 Overall he was never really fussy until about 20 minutes before we got home. That is amazing to us because, between traffic and a stop over in BR, he was fine until we had been away from home for over 11 hours. I'm proud of him.

I think that just about covers this week. The next week should be pretty calm.

Thanks for reading.
Posted by bwallace at 8:24 PM