Despite great weather outside, this weekend was very showery.

Working backwards: Sunday was Joan's "family shower", and Saturday night was Brad and Lindsey's "friends shower." To kick it all off though, Saturday morning Aunt Connie and Cousin Amy threw a shower at our house for Liz and Caroline.

The decor was decidedly more pink than for our shower. Lots of folks got a chance to get some face time with Caroline, which should hold them over for a while.

Caroline's birth appears to have activated a new area of Paul's brain for him to explore (which is good because he was running out of things in the outside world to learn).

He's been inspired to start a blog about his adventures in the kitchen and in the nursery over at CookingDaddy.com

I'd try to write an interesting description, but he has done better than I ever could ( near PhD trumps a JD in writing skills):

watch as i attempt to change a diaper after two sleepless nights in a row! gasp as i set off to bake a “pasta thingie” without ever having glanced at a recipe or indeed cooked anything similar, ever! 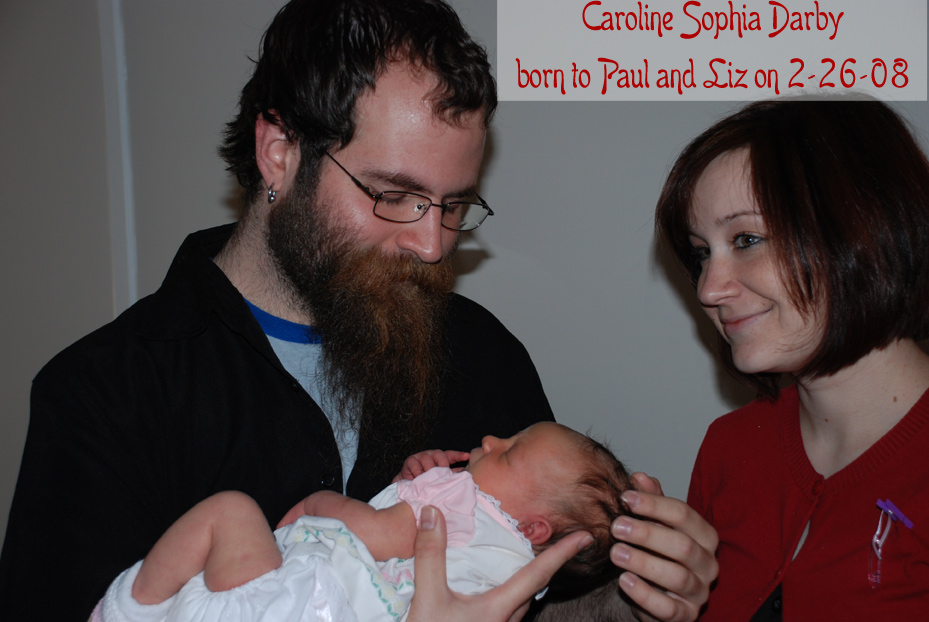 would you let that guy anywhere NEAR your kitchen, much less your baby? No, of course you wouldn’t, because you’ve got at least as much sense as the average marmoset!

and yet, HE is ME! yes!! and somehow, not only is my kitchen still in oneish piece after two years of my abuse, but i have YET to trim my beard, despite the fact my daughter ripped out 2 pounds of my facial hair in the first week of her life so that my face appears to have wooly caterpillars hanging off of it instead of a beard!

interested? intrigued? vaguely horrified? stick around, it’ll only get better!

So, check it out. I'd expect content within the next week despite his busy student/daddy schedule.

Things will likely be slow on this page for the next month or so, unless, unlike Santa and the Easter Bunny, little Cajun Baby Wallace decides to come early.

But check back every once in a while. You never know when I might get an idea in my head that I need to put into someone else's head, for my own mental health.
Posted by bwallace at 8:36 AM