I've been so neglectful of this place that procrastination paralysis has set in. Too much unsaid to be able to get anything said.

I already posted a little rundown of what we've been up to recently. Now this one is just about the kids. You know, our fashion accessories.


Riley is now three years old and is rapidly becoming a real kid. 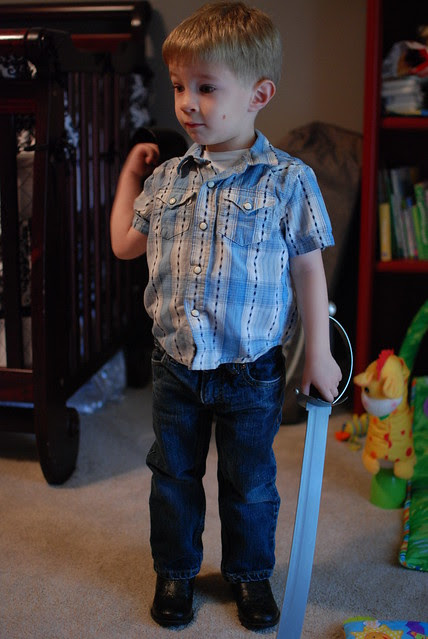 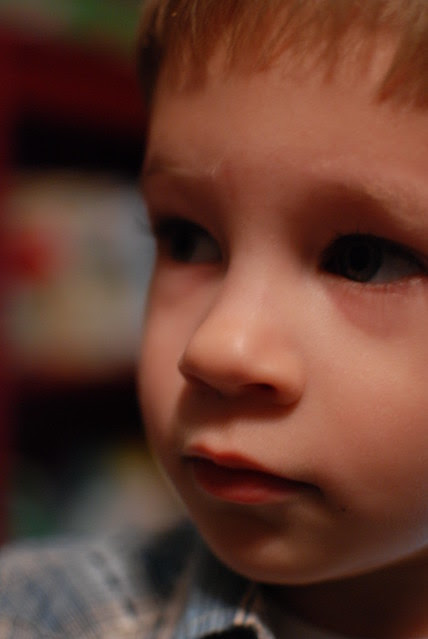 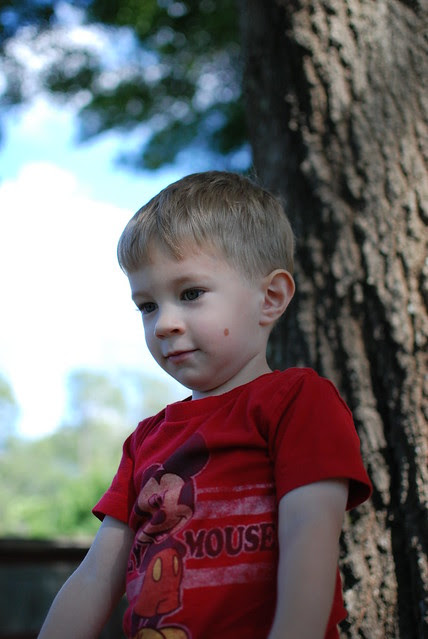 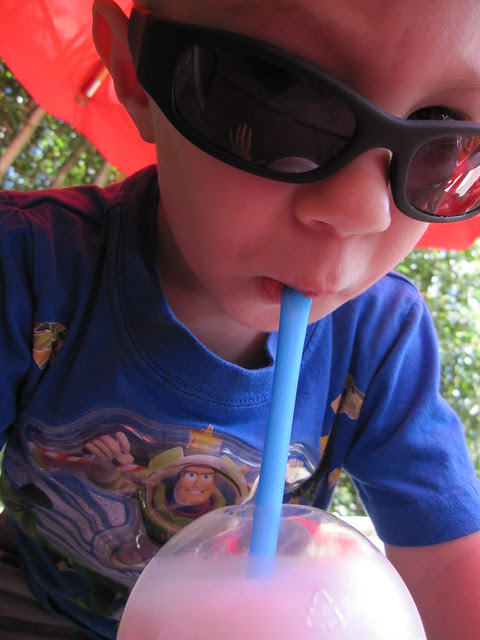 Our new neighborhood is great for him being able to get out and run, explore the adjacent cane fields, and "fish for crawfish." 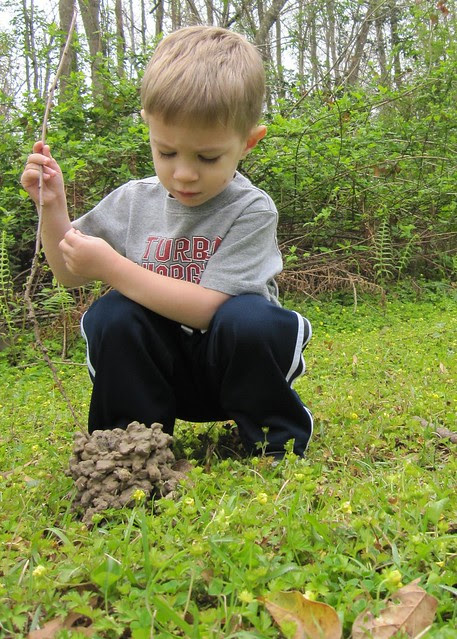 We still have to push food on him to keep him on the weight chart, but he's got great local tastes and can always be counted on to eat pulled pork from Johnson's, Meche's donut holes, or a bag of Crawtators. 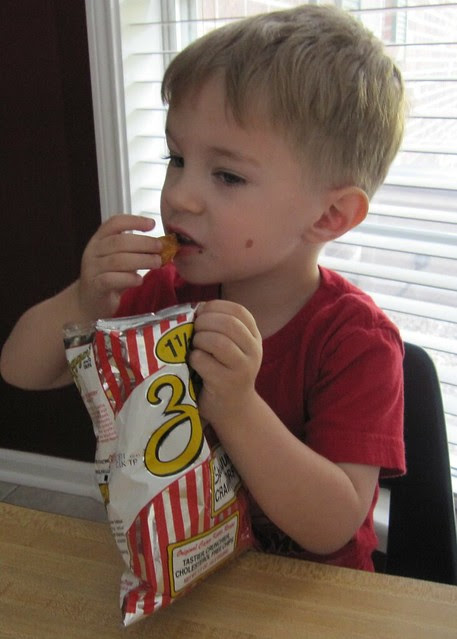 Upon finishing that bag he told me, "Those chips feel like they have fire in them."


And he put a good dent in the minicake from Southside that he had for his Birthday Breakfast. 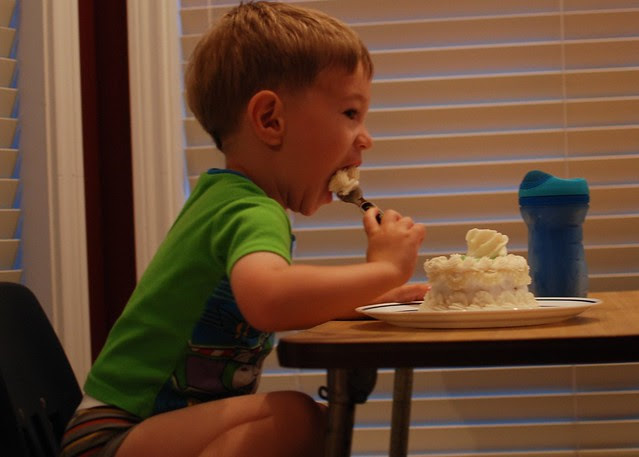 Much to our satisfaction, he seems to really like music.
In addition to having a toy trumpet, saxophone, 2 guitars, 3 harmonicas and plenty of drums, he's also gone to a few concerts at Lafayette High and seen the Symphonic Band and Percussion Ensemble (his favorite)

He's been really good about sitting quietly and paying attention to the music, except at one point where he had to be taken out, crying, because he wanted to be the one playing the drums. 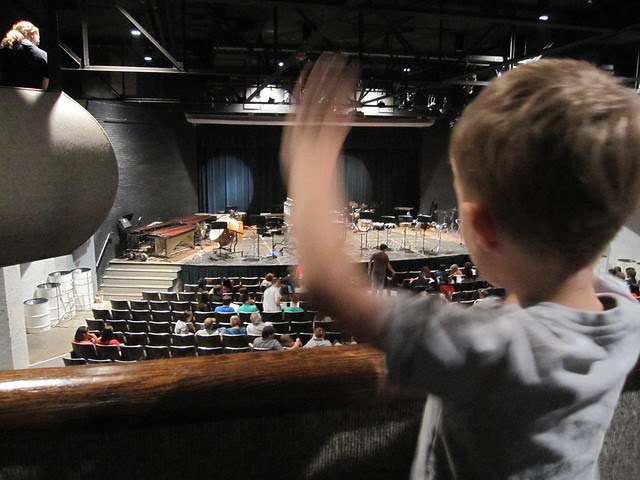 (and I count him pretending to conduct to be good behavior, though it would probably not be considered so for an adult.)


If you are looking for an activity that is good for the kiddos' brains and free, check out the calendar over at www.lhsband.net (note: during marching season not everything is free, but most concert events are.)

I'm sure other schools do stuff too, but that would be like a Blood telling you to go hang out with some Crips and you ain't gonna catch me slippin'.


But wait, there's more. For the same low price, we'll double your order and bludgeon you with photos of not one, but two of our offspring.


Avery is almost three months old now. Joan has been back at work for two weeks and the baby's sleep schedule is kind of hit and miss.

But she's starting to look more human-like and, as of this week, is smiling and attempting to use her voice. 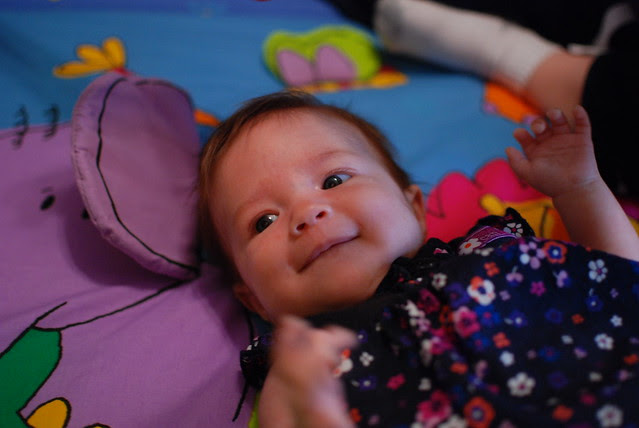 Joan has had fun playing with Avery's hair and perfecting the "bowhawk" which capitalizes on her hair's natural tendency to 'hawk up. (which is different from hock up) 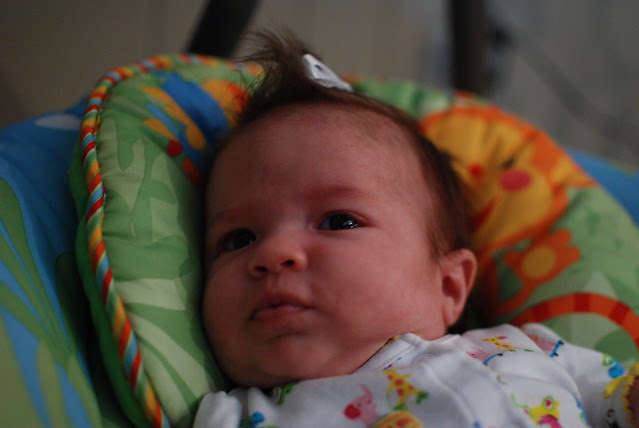 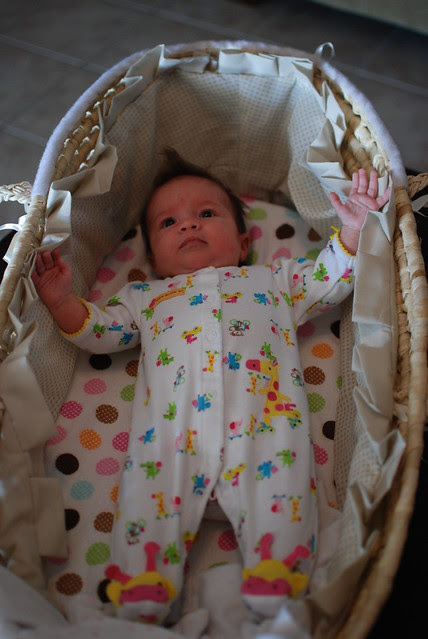 She was born with a lot of hair and, for a while, was shedding like a Husky in Ecuador in July.

But she had enough to start with that she only ended up with a couple of thin spots. 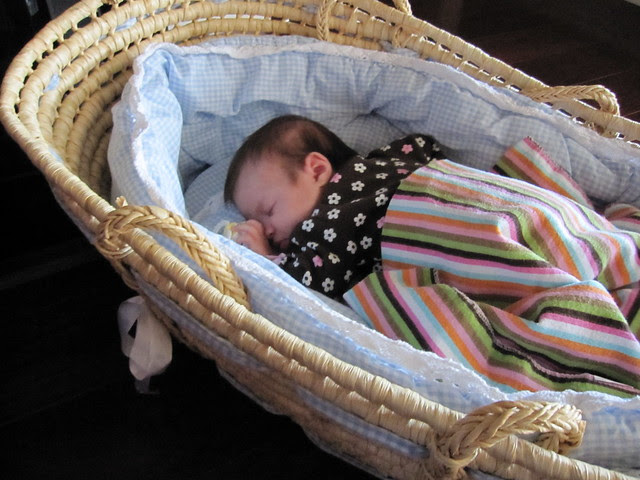 She's old enough now to allow us to go to gatherings with our friends, where Sarah and Traci compete to see who has the most "baby whispering" skills. They're both pretty good. 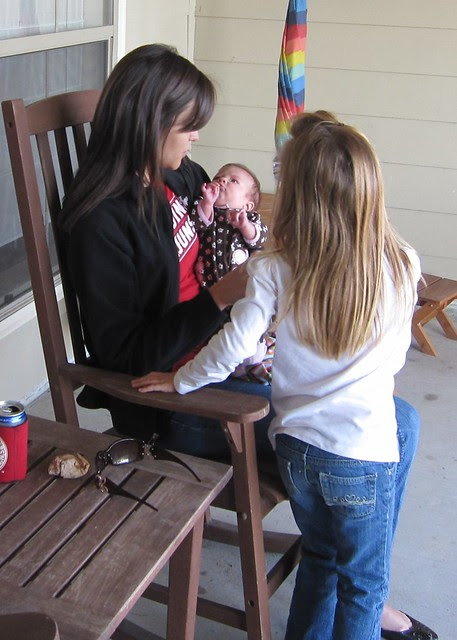 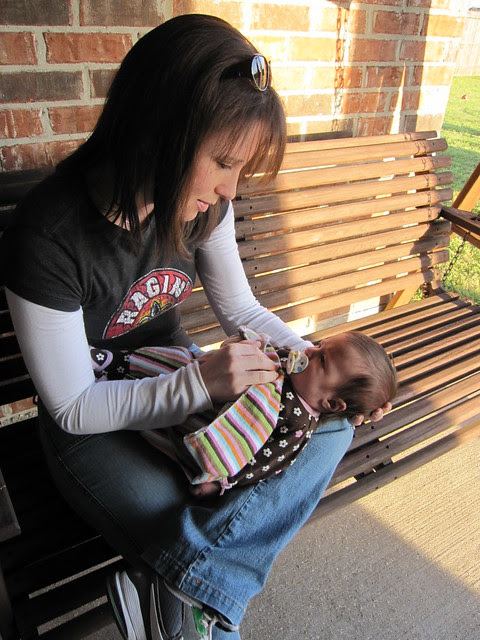 and Traci better be, because I've heard tales of what her husband was like as a kid.

Most shots we have of Avery come with a pacifier in her mouth. 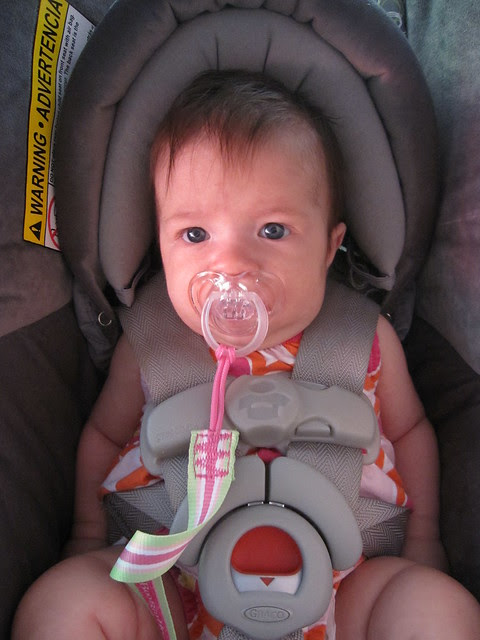 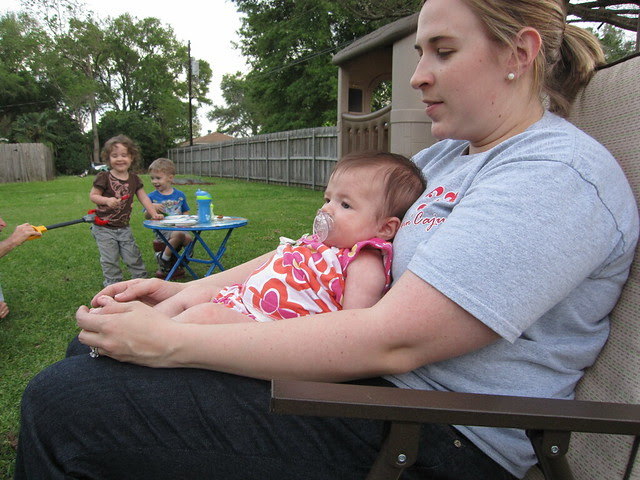 but we have a few good ones without 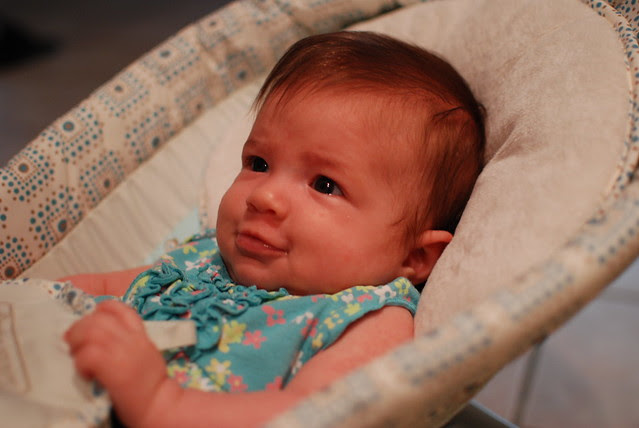 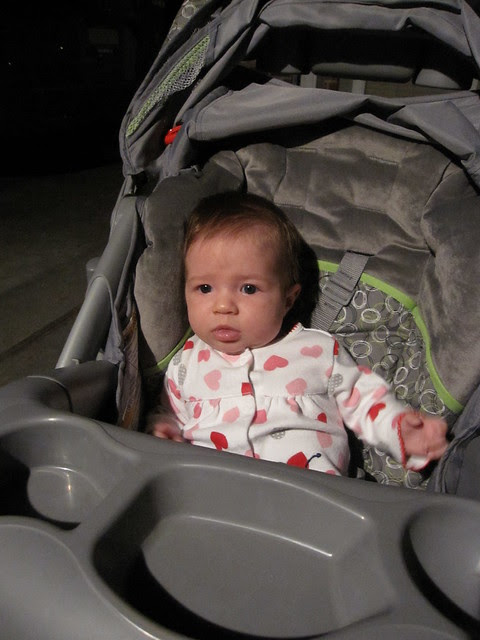 and at least one that will be used as a screening tool for future potential boyfriends. 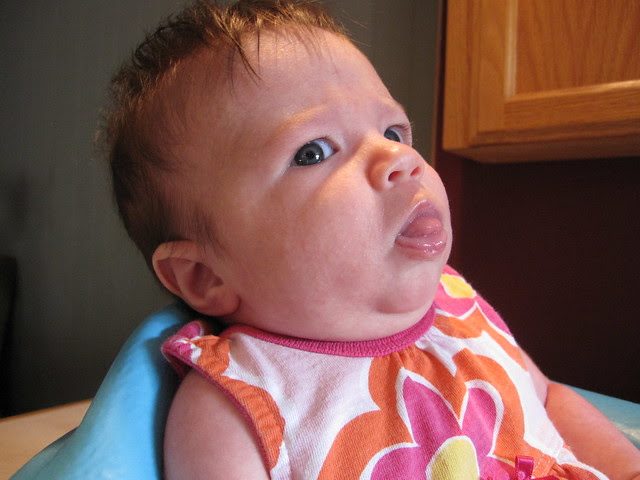 Both kids get along pretty well for now.
We know it won't always be that way, but we'll take it as long as it lasts. 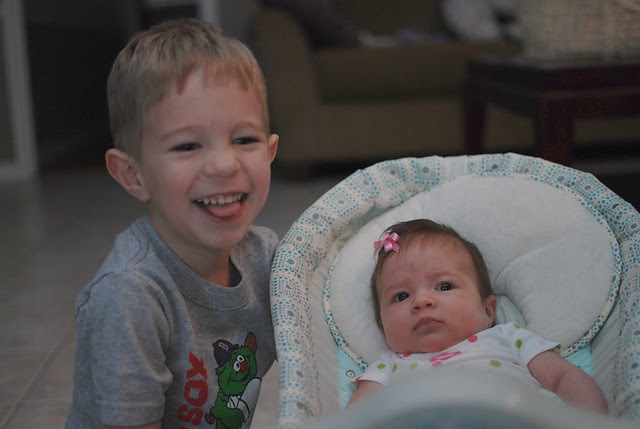 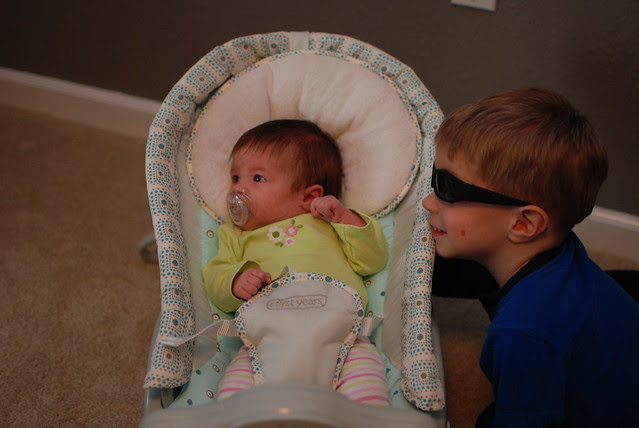 and finally, we want to extend a special thanks to our old high school pal Christian, for Avery's custom bedroom art, inspired by a photo of her bedding. 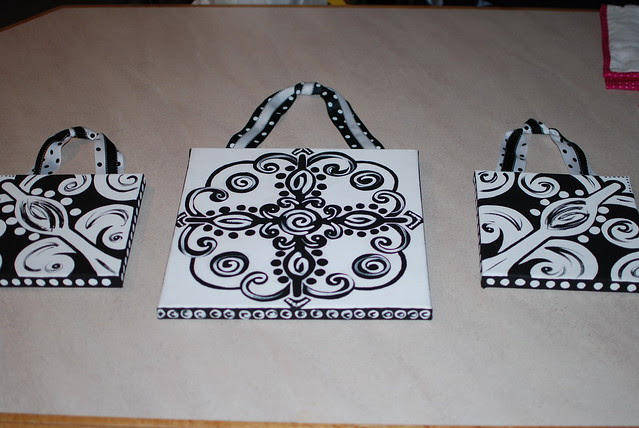 People with talent have always amazed me, and Christian definitely has some.
Posted by bwallace at 7:24 PM